Georgetown founded, the first Catholic college in the U.S.

Although not nearly as famous as the Leutze painting, there are two others by members of the Romantic School that are worthy of note here. 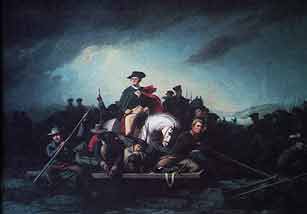 George Caleb Bingham, although born in Virginia in 1811, spent most of his life in Missouri, where he died in 1879. From the family farm, he was apprenticed to a cabinetmaker when he met an itinerant painter sometime around 1830 (there were many such traveling painters in early America - Leutze himself had done it for awhile).

Teaching himself with books and the study of popular engravings, he was doing portraits professionally at least as early as 1834. In 1838 he went to Philadelphia to study and work, and from there he went to Washington, D.C. He was always a dabbler in politics, and had campaigned hard for William Henry Harrison. In Washington, he painted Daniel Webster and many other luminaries of the day, and of course such patronage assured him a "name" among the portraitists of the time.

This picture is a perfect example of the almost geometric style of of his early work, with broad horizontal areas, tightly organized and balanced figures, and people and objects arranged in a pyramidal shape. He is also noted for the clear light in his paintings, as exemplified by the halo effect around Washington.

Since Bingham backlights this scene, the viewer is left to ponder the light source that illuminates the Great General and the men in the foreground, and this treatment gives the main figures an almost other-worldly effect, typical of the melodrama of the Romanticists.

While the barge is closer to the ones actually used than the boats in the Leutze work, putting Washington on horseback, while heroic and dramatic, is even less believable than having him standing up in the boat.

Bingham was in Dusseldorf in 1857 and undoubtedly knew Leutze himself, although what influence that had on this work is unknown. Binghams great masterpiece, "Fur Traders Descending the Missouri" can be seen in the Metropolitan Museum in New York, along with Leutzes "Washington Crossing the Delaware".

Thomas Sully
Passage of the Delaware, 1819 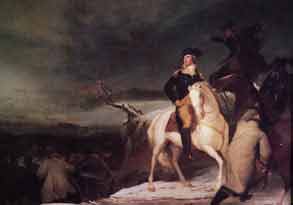 Sully is a colorful figure in American painting no less for his abilities than for himself. He was born in 1783 in Lincolnshire, England, and was brought to America with his family in 1792. His family were actors and circus performers, and for awhile, he himself was an acrobat.

He first sought his fortune selling insurance, and then fell under the influence of a brother-in-law who was a painter. In 1806 he married his widowed sister-in-law and became step-father to several nieces and nephews.

In 1807 he met and fell under the influence of Gilbert Stuart, and moved to Philadelphia. He became a U.S. citizen in 1809 and then went to England to study under Benjamin West. Upon his return to Philadelphia, he took over the rooms of the late Charles Willson Peale in Philosopical Hall, and fell heir to Peales reputation as the best portraitist in that city.

He is known for elegant, romantic, almost sweet portraits. In 1837, back in London, he did a series of sketches and a three-quarter length portrait of the soon-to-be-crowned Victoria. The culmination of this work was a later full length portrait, but he overdid himself, and most people consider the smaller work, and one or two of the sketches, to be his masterpieces and the best portraits ever done of the monarch.

Never a good historical artist, he was known to produce "potboilers" when he tried his hand at it. Nonetheless, of all the renditions of the Crossing, this one probably comes closest to real life. Of course, we still don't have a blizzard in the dead of night, but the men struggling with horses and cannon convey the confusion of an army on the move and the urgency of their mission. Sullys potboiler effect can be seen in the rearing horse with an officers sword drawn for no apparent reason and the angular, bare tree seeming ready to fall from the precipice.