Tom, vain's your Pains; They all will fail:
Ne'er was good Arrow made of a Sow's Tail.

Today, the famed Morgan's Rangers are commemorated by the Southern California independent reenactment group of the same name, and the Sons of Liberty Chapter of the Sons of the American Revolution color guard commemorates the elite Commander-in-Chief's Guards, and the units jointly sponsor appropriate commemorative activities.

But joint operations between the two detachments actually dates back to 1778 - 222 years!

No two units of George Washington's Continental Army could have been more opposite. Morgan's Rangers, said by British General William Howe to have been the most dangerous regiment in the American Army, and the Commander-in-Chief's Guards, without a doubt the most elite unit of said army, even went so far as to require every member of the Guard (except the musicians) to be 5 foot 10 inches tall! The Guards were also the best uniformed and equipped of all the Continentals. The Rangers, on the other hand, were fiercely independent, addressed their officers by their given names and refused to abide by any military protocols. As an example, When the Army was called to attention, the Rangers simply lined up, standing at ease. Discipline simply wasn't their thing, but fighting was! The Rangers were so unruly, and had such a negative impact on our attempts to establish a well trained army, that Washington made sure that the Rangers were always camped away from the main army, but close enough to support it in either offensive or defensive operations. 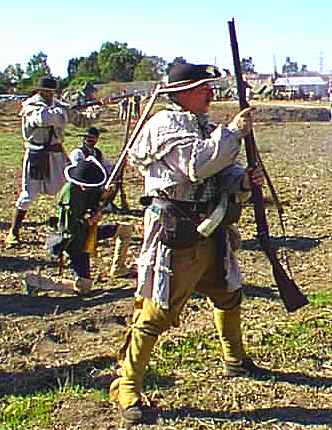 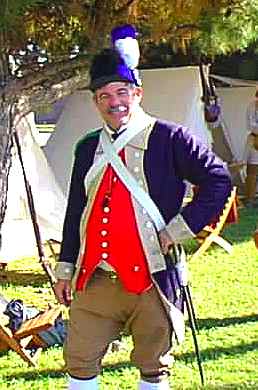 Why then would these two units end up on joint operations?

In May, 1778, General Washington learned that Lieutenant General, Sir Henry Clinton, who had assumed command of the British Forces in America, was preparing to evacuate Philadelphia and return to New York City. This was wholly unexpected. Washington feared that Clinton, with his numerically superiority and well equipped force, would attack Valley Forge.

Surprisingly, the only thing found in the official records of Washington's Headquarters was a report on a Council of War that was held, but no agreed strategy was noted. Perhaps fear of the ever present spies precluded publishing his intentions.

Washington selected the Marquis de Lafayette for overall command of the first operation against Clinton. It is highly possible that Washington chose Lafayette in honor of the French Alliance, ratified by Congress on May 4th. In a personal letter, written in an almost fatherly style, Washington directs the inexperienced Marquis de Lafayette to command a division of 2,200 men and five cannons. He ordered him to proceed to Barren Hill, between Valley Forge and Philadelphia. The 2,200 men made the expedition far to large to be effective as a reconnaissance party, and too small to be an fighting force against such overwhelming numbers. Although there are no surviving official orders, General Washington assigned 102 members of his personal Guard to protect Lafayette. Col. Daniel Morgan's Rangers were also detailed to this expedition.

General Clinton marched a sizeable portion of his army out of Philadelphia to capture Lafayette and his division. It was a very close thing, with Lafayette and his troops barely gaining a ford and making their escape across the Schuykill River. How much interaction there was between the Guards and Rangers is not recorded. 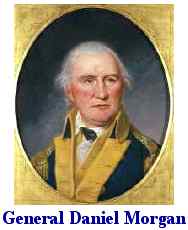 A few weeks later General Washington issued the following orders to Colonel Morgan. These orders, even by 18th Century standards are extraordinary, and demonstrate Washington's understanding of the value of the Rangers.

Sir;
The Corps of Rangers, newly formed, and under your Command, are to be considered as a body of light infantry and are to Act as such; for which reason they will be exempt from the common duties of the Line. At present, you are to take a Post at Van Veghten Bridge and watch, with very small scouting parties (to avoid fatiguing your men to much, under the present appearance of things) the Enemy's left flank, and particularly in case of any movement of the enemy you are instantly to fall upon their flanks and gall them as much as possible, taking especial care not to be surrounded, or have your retreat to the Army cut off.

I have sent for spears, which I expect shortly to receive and deliver to you, as a defense against horse; till you are furnished with these, take care not to be caught in such a situation as to give them any advantage over you. It occurs to me that if you were to dress a Company or two of true Woods Men in the right Indian style, and let them make the attack accompanied with screaming and yelling as Indians do, it would have very good consequences especially if as little as possible is said, or known of the matter beforehand"

Eleven days later, on June 23rd, Washington ordered his Guard Captain Caleb Gibbs (1748 - 1818 - RI), Lieutenant Benjamin Grymes (1756 - 1803 - VA), four sergeants, four corporals and seventy-two Guardsman to join with Colonel Daniel Morgan's Rangers. Lieutenant William Colfax (1756 - 1838 - CT) and the remainder of the Guard were to stay at Headquarters. Unfortunately for historians, among those detailed to stay behind was Private Elijah Fisher, who was keeping a daily diary of events. His observations would have been helpful in determining the events that took place.

Why Washington ordered these two, so very different, detachments to operate together may be explained in his written orders to Colonel Morgan. From Washington's statement regarding "spears" as a defense again cavalry, it is obvious he was well aware of the Ranger's inability to defend themselves in close quarter actions against regulars or cavalry. Is it possible that the requested spears failed to manifest themselves, and in lieu of spears, Washington sent half his personal guard, whose weapon of choice was the bayonet?

Regardless of the reasoning behind uniting these two units, they immediately started carrying out the General's orders. The Guards and a number of Morgan's Rangers surprised a body of British grenadiers, who were resting besides a stream. One report indicates that there were 38 captured. This was accomplished right under the noses of a sizable detachment of Light Infantry. The British Light Infantry attacked. With prisoners in tow, the Guards and Rangers made their escape through the nearby swamp. When they arrived at Morgan's field headquarters, without having lost a single man or prisoner, Morgan personally welcomed them. Noticing that the elegant uniforms of the Guard were covered in mud from their dash through the swamp, it is said that Morgan "indulged himself in a stentorian laugh that made the woodland ring."

Two days later, the Battle of Monmouth Court House was fought. General Clinton was marching his army to New York, straight across New Jersey. Upon learning that Washington's Army was following, and reports that there were sizable American detachments on his flanks, including the feared Morgan's Rangers and the Guard, he justifiably became concerned with the possibilities of attacks on his flanks or rear. He changed his order of march. He placed the 1,500 wagon baggage train in front, protected by Hessian General Wilheim Knyphausen (1716 - 1800 - Germany), and moved his best troops, the grenadiers, light infantry and cavalry to the rear. 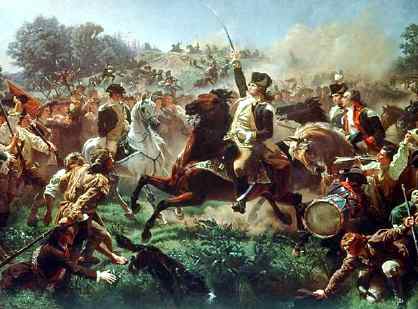 Clinton's line of march was obstructed by the New Jersey Militia, which had felled trees across the roads, burned bridges and placed all manner of obstacles in his path. This action gave Washington the advantage of being able to manoeuver his forces almost at will.

Although American General Charles Lee (1731-1782 - England, VA) opposed a general engagement, his senior position in the army gave him command of the advance forces. As the battle started to develop, Lee apparently had all the tactical advantages, but he was in awe of the fighting capabilities of the British Army, and did not have a high opinion of his own American forces, and ordered a retreat!

Washington arrived on the scene, rallied his troops, and stopped Clinton's counterattack. The American army gave better then they got, stood their ground and fought the British to a standstill. That night, Clinton retreated, leaving Washington in control of the battlefield.

Benson J. Lossing wrote: "The battle of Monmouth was one of the most severely contested during the entire war. Complete victory for the Americans was twice denied. The first was the cowardly retreat of Lee, and the second was the unaccountable inactivity of General Morgan's Rangers and the Guard. Morgan had 600 of his famed riflemen and eighty members of the Guard, and probably a number of local militia that responded to the fighting. His position was on the left flank of Clinton. No record exists explaining why Morgan did not attack. He had explicit orders from Washington. His reputation for gallantry was second to none. Yet, the only report we have is that for hours the latter was at Richmond Mills, three miles below Monmouth Court House, awaiting orders, in an agony of desire to engage in the battle, for he was within sound of its fearful tumult. To and fro he strode, uncertain what course to pursue, and, like a hound in the leash, panting to be away to action. Why he was not allowed to participate in the conflict, we have no means of determining. It appears probable that had he fallen upon the British rear, with his fresh troops, at the close of the day, Sir Henry Clinton and his army might have shared the fate of the British at Saratoga."

Unfortunately, Lossing did not cite his sources. The casualties were high for battles of the era. We lost 72 killed, 161 wounded and 132 missing; many of the latter had dropped of heat exhaustion and soon rejoined their regiments. But, at least 37 are believed to have died of heat stroke. The British losses in killed and wounded was 358, and it is recorded that no less then 60 died from the heat. Significantly, the British had 600 deserters, 440 of them Hessians. All the deserters were brought to Philadelphia, so that count is accurate. We can only assume that Morgan had received orders from General Lee, either directly or indirectly, (although Lee denied having any contact with Morgan), countering the orders issued by Washington. Based on Morgan's conduct at the Battle of Saratoga and other actions, his presence on the field of Battle would have been decisive. No record exists in which Morgan or Gibbs explained their inactivity, and no official inquiry was made into it, hence we can assume that Gibbs explained the situation directly to Washington, who accepted said explanation, and the matter ended there. It is also certain that this lost opportunity haunted both officers for the rest of their lives.

We have found no record of subsequent operations of the Rangers and the Guards, but it was not until July 7th, at Scotch Plains, New Jersey, that Captain Caleb Gibbs and his men rejoined General Washington and headquarters. From this we can assume that they spent the week after the battle following the British army back to New York City and the protection
of the British fleet.