Georgetown founded, the first Catholic college in the U.S.

Spare and have is better than spend and crave.

We in the SAR have studied a great deal about the Continental Army and in particular our Patriot ancestors. This is as it should be, after all we are who we are. But, what was it like to be a soldier of the King?

On that fateful morning in April '75, when "the shot heard 'round the world" was fired, the total effective strength of the British Army - world wide - was some 45,000 officers and men. 8,500 of them were stationed in North America. (Very few of this original force survived the eight years of war. By the end of the first year (1775) 16% of these troops were already casualties!

This force primarily consisted of infantry, a small artillery contingent and no cavalry. Six years of hard fighting later, when Lord Cornwallis surrendered his army at Yorktown, the British Army in North America numbered 2,484 artillerymen, 39,294 infantry, and 6,869 cavalrymen, plus a few thousand contracted civilians.

Who were all these men? This article will present a brief description of the average "Red Coat" or"Lobster Back."

If we were to ask today's armed forces to serve under the same rules that the 18th century British Soldier served, we would have an instant mutiny.

First, Enlistments were for life (albeit this practice was sometimes reduced during rare times of peace). The pay was so terribly low that an officer of the 29th Regiment of Foot said in a pamphlet on Army reform (London 1775): "From the 8 pence (about 20¢ today) which was issued for the pay of the soldier, when all deductions were made for clothing, for necessaries, for washing, for the paymaster, for the surgeon, and for the multiplied articles of useless and unmilitary fopperies (intro-duced by many colonels to the oppression of the soldier for the credit and appearance of the Regiment) there is not sufficient overplus for healthful subsistence; and as to the little enjoyments and recreations which even the meanest rank of men can call their own in any country, the brave, the honorable, the veteran soldier must not aspire to." Many of the Officers were hard pressed to make ends meet.The British military system of the 18th century required that commissions and officer level promotions be purchased, and accordingl;y, most officers had to have independent incomes.

Under these conditions, what would prompt a subject of the crown to enlist in the army? Very few of the soldiers were volunteers. Recruiting squads, and every Regiment had one, obtained men by any means possible. The Royal Navy's recruiting parties were called "Press Gangs".

Many a young man met one of these recruiters in a local pub, and on waking the next morning, with a fearful hangover, found he had accepted the "King's Shilling" and had enlisted for life. The expression "The King's Shilling" referred to the bonus paid by the Crown for enlisting, and once given, meant that death was the only option. Another source of "volunteers" were the Courts. Most crimes in the 18th Century were punishable by the gallows. As an alternative, some judges would commute the prisoner's sentence to enlisting in the Army.

As a result of the miserable conditions the average soldier was forced to endure, it was necessary to maintain the strictest of discipline. A small theft resulted in hanging. Hundreds of other infractions were punishable by the lash - "a cat-'o-nine-tails". Punishments were always administered in public. This was so common that the expression "Bloody-backs", used both in England and the Colonies, referred not to the to color of the Regimental Coat, but to the bare backs of the soldiers.

General Sir William Howe, Military Governor of Massachusetts, was very popular with his men and considered by most to be eminently fair. His orderly book paints quite a different picture: "Thomas Owen and Henry Johnson, Private Soldiers in His Majesty 59th Regiment of Foot, tried by General Court Martial . . . for having broken into and robbed the store of Messrs. Coffin, storekeeper, of sundry goods, the Court having duly considered the whole matter before them is of the opiniont that the prisoners are guilty of the crime laid to their charge . . . adjudge that said Thomas Owen and Henry Johnson do suffer death by hanging. " The sentence was carried out on Boston Common.

Another example of a lesser offense: "Thomas Bailey, grenadier in His Majesty's Corp of Marines, tried by General Court Martial . . . for striking Lt. Russel of the Fourth or King's Own Regiment and of insolent mutinous behavior. The Court...having found him guilty of the latter and therefore sentence him to receive 800 lashes on the bare back with a cat-'o-nine tails."

By comparison, on September 11, 1776, an American Sergeant was likewise court martialed. " .... Peter Richards, Sergeant in the General's Guard convicted by the same Court Martial of "Abusing and Striking " Capt [Caleb] Gibbs, sentenced to the ranks, and whipped thirty-nine lashes . "

When we imagine the British Regulars, our mind's eye pictures them resplendently uniformed, always spotless. But, did you ever think of the effort it took to keep those uniforms in that condition? Contemporary sources state that the common British soldier spent more than three hours preparing his uniform for "parade". The order in which they prepared was: First, dress the hair. Stiff curls were worn falling alongside the face and a "pig tail" in the back. This was accomplished by using an ample amount of pomade, or the end of a tallow candle. Then they had to powder their hair white. The next step was to shine the three dozen brass buttons on their red coats. All white facings had to be whitened with pipe clay. Their shoes had to shine like new. The last article of clothing to be put on was their gaiters, which were whitened with pipe clay and put on WET to insure they fit snug when dried. The cross belts and waist belt were all whitened. Bayonet scabbard, short sword scabbard (if one was carried) and the cartrige box were shined. And finally, the "Brown Bess" musket was polished until it gleamed. The brown color having long been rubbed off, the musket shined like stainless steel.

Although a very poor existence, most Regiments permitted, and in fact paid for, the families of the common soldier to go on foreign service with the men. The wives of the Regulars served a very necessary function. They washed, cooked, mended uniforms and served as nurses in the time of battle or sickness. They also helped keep the morale of the men up. Surprisingly, there seemed to have been little problems with love triangles. In spite of the harsh living conditions, marriages were sacred and God help a common soldier making advances toward another's wife. Such acts usually resulted in death. The Regiment would investigate, determining that the deceased did indeed violate or attempted to make improper advances, then ignore the incident.

When you have men and women living together, you have children, and the British Army was no exception. The Children, like the wives, were fed out of the Regimental stores, and were generally well treated, although rarely provided any formal education. When old enough, they, like their mothers would help with camp chores.

Childhood ended abruptly at age fourteen. When a boy's 14th birthday was at hand, the lad was given a choice of enlisting (for life) and serve as a drummer until he reached his full growth, when he became a regular (this was a good source for recruits), or be turned out of the camp. Some soldier-fathers apprenticed their sons in order that they might have a better life, but most encouraged their sons to follow in their footsteps. When in foreign service, being sent back to England was not an option, unless the father could afford to pay the passage, which was highly unlikely.

As for the girls. They either chose a husband, with their fathers approval, or were turned out of the Regiments encampment. The girls also could be apprenticed.

Army widows of the day, and based on the high rate of casualties, there were many of them, were given a month to mourn their loss and find a new husband within the Regiment or she too would have to leave the camp. On foreign service the widows had little choice but to remarry.

Napoleon Bonaparte said that "An Army travels on its stomach." This was very much the case during the American Revolution. A contemporary account says that a common soldier's rations consisted of soft bread or biscuits, cheese, butter, and beer. Vegetables, beans, rice and peas were added when available. One pound of salt pork, or fresh beef, was the daily ration of meat. When meat was in short supply, fish was substituted. Since fish did not travel well, it had to be heavily salted, which frequently left the soldier with a severe thirst. Consequently it was not liked. The cheese and biscuits were the usual rations taken when the troops were on a long march. The families of the soldiers were issued the same rations, but in proportional quantities.

These were the British men-at-arms that participated in the American Revolution (and all other British wars of the age). One would think that at the first opportunity to desert they would. There were desertions, but not as often as one might think. To the contrary, the average British common soldier was courageous, and faithful to his duty. Think of the first engagement of the American Revolution - Lexington and Concord. Few of the British Regulars were combat veterans. Yet, they were up all night, then marched seventeen plus miles before the action started. Then, against impossible odds, they fought every inch of the way back to Boston. Only the most disciplined troops could have withstood the constant musketry and not panicked. They saw 273 of their ranks cut down, and still they maintained control. These were the same soldiers that two months later stormed Bunker (Breeds) Hill, enduring 1,150 casualties out of the 2,500 engaged! It is to their credit that they withstood this carnage and still carried the day. 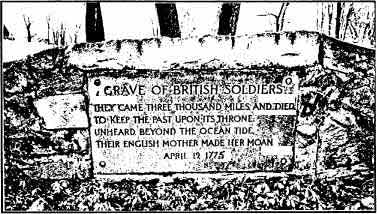 Final resting place of two British soldiers at Concord, buried where they fell

The Regiments stationed in North America were among the best in the British Army. An esprit de corps existed which obviously was infectious. In spite of the hardships, the soldiers were extremely proud of their Regiments. We do not fully comprehend this thinking, But, throughout British history, its' ill treated, underpaid, and often abused soldiers continually rewrote military tactics with impossible feats of courage. It mattered not how many times the personnel of the Regiment were replaced, it always had it's distinct Regimental identity, and was known and feared because of its historical reputation. It was far better to fall in battle than to disgrace the Regiment with a display of cowardice. Each and every British soldier knew the history of "his Regiment" and shared in its "glory." He knew the name and exploit of every one of the Regiments' heroes. And as with all young men, every one dreamed of adding his name to those rolls.

The following is a listing of all of the British Regiments that participated in the American Revolution:

The British Soldier was a man to be respected and feared. For our ancestors to have faced them, and won, is almost unbelievable, but it makes that victory all the sweeter.