Epitaph on a Scolding Wife by her Husband.
Here my poor Bridgets's Corps doth lie,
she is at rest, — and so am I.

Barbara Glover is retired from the profession of nursing. She is a docent at Riversdale Mansion, Maryland, and author of a number of articles on maternal and general health care previously published in The Riversdale Letter, where this article first appeared in the Summer/Fall 1998 issue. 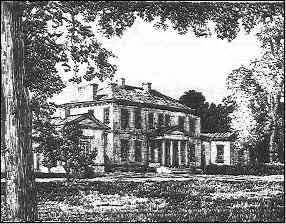 Riversdale, a plantation home of the Calverts of Maryland
artwork by Gerard LaRoche

Contrary to American legend, George Washington never owned a set of wooden teeth - while he did own many sets of dentures, none were of wood construction. Through the letters, journals, and accounts left by our First President we have a well documented case history of his lifelong dental problems and the level of dental care available in the mid and late 18th century.

Washington had a long history of illness. In 1751 he wrote of having smallpox and the following year complained that he had had a bout of "violent plurise." As a young lieutenant colonel in 1755 serving with General Braddock in the French and Indian War, he suffered "pain in the head" and dysentery. In 1761 when he was twenty-nine and back at Mt. Vernon, he got "breakbone fever," now known as dengue fever, characterized by headache, fever, and severe muscles and joint pain. Over the ensuing years there were attacks of malaria, flu, and rheumatic complaints. Adding to the stress as commander of the Continental Army were constant unrelieved toothaches. In some instances, one cannot help but wonder if his teeth might have been the source of the chronic infections he suffered.

According to his accounts, he received the standard medical treatments of the day, which included heavy doses of the infamous calomel (mercurous chloride) that can lead to destruction of the teeth. This, combined with what may have been naturally poor teeth, led to dental problems beginning when Washington was twenty-two. Over the next thirty-five years, he would lose all his teeth despite daily brushing, use of dentifrice and mouthwash. Washington's toilet set, containing a silver toothbrush and tongue scraper with a silver tooth powder case, can be seen at Mt. Vernon.

Toothpowders were made from pumice, borax, roots and herbs, even burnt bread and tobacco were sometimes used. Unfortunately some of the powders were quite abrasive and could destroy the tooth enamel. Washington might have used solutions made with herbs or the resins of balsam or myrrh as a mouthwash. Salt, wine or vinegar could also be added to water for rinsing the mouth.

Toothaches followed by extraction would be a yearly occurrence for Washington. There were frequent episodes of infected and abscessed teeth, inflamed gums, and finally ill-fitting dentures. One can imagine that his reputed "hair-trigger temper" might have been the result of a constant battle with pain. He was continually corresponding with noted dentists of the day asking for a file to repair a denture, a scraper to clean his teeth or pincers to fasten wires on his teeth. He inquired about a dentist of "whose skill much has been said." He requested material to make a model of his teeth so a dentist could make new dentures.

When George Washington was inaugurated for his first term as president in 1789, he had only one natural tooth remaining and was wearing his first full set of dentures made by John Greenwood. Previously he had had partial dentures which were held in place by hooking them around the remaining teeth. The Greenwood dentures had a base of hippopotamus ivory carved to fit the gums. The upper denture had ivory teeth and the lower plate consisted of eight human teeth fastened by gold pivots that screwed into the base. The set was secured in his mouth by spiral springs.

Washington's next set of dentures was made in 1791 and a third in 1795, for which he paid sixty dollars. James Gardette made a large and very clumsy set for him in 1796. Apparently Washington was not pleased with these dentures and may have ordered another set from Greenwood in 1797. Washington often returned dentures for adjustments and repairs, at one time complaining that "they were forcing his lips out." His final set was made in 1798, the year before he died. This set has a swagged gold plate with individual backing for each tooth which was fastened by rivets. The lower denture of this set, along with others, are on display in the Dr. Samuel D. Harris National Museum of Dentistry in Baltimore.

Written descriptions of Washington's physical appearance note facial and vocal changes over the years. Portraits by leading painters of the day also record facial changes. Some of the alterations in his appearance may have been due to his dentures. For example, the springs, securing his dentures could have pushed his teeth forward, causing the cheeks to look puffy.

In Charles Wilson Peale's first portrait of Washington in 1757, the mouth is noted to be quite small. Washington was twenty-five at that time and certainly still had some of his natural teeth. The painting done in 1776 by the same artist shows a scar on the left cheek from a fistula caused by an abscessed tooth. Here the face is long and oval. There is a story that Peale made a set of dentures for Washington when he was sitting for one of his portraits, because Peale felt that the set he was wearing was causing him too much discomfort and facial disfigurement. 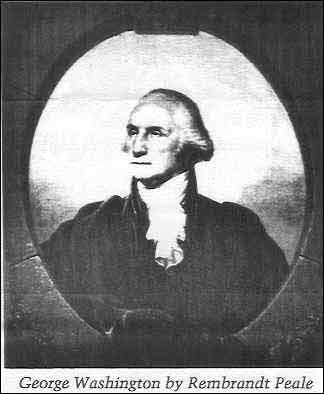 Rembrandt Peale's portrait in 1795 is thought to be a realistic one and here the mouth is seen as puffy and swollen. Gilbert Stuart reportedly packed cotton inside Washington's mouth to support the lips in his 1797 painting.

It is not difficult to imagine that George Washington's dental problems might have had some influence on history. Dental discomfort is said to have caused him to forgo giving his second inaugural address. Eating, smiling, and talking all must have given him great discomfort. In later life he could only eat soft foods. The story of Washington's long and painful struggle with severe dental problems adds another dimension to this American hero's life as well as to the history of dentistry.

Prinz, Hermann. Dental Chronology: A record of the more important events in the evolution of dentistry. Lea & Fehiger, Philadelphia, PA. 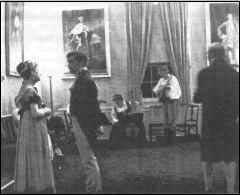