Wouldst thou enjoy a long Life, a healthy Body, and a vigorous Mind, and be acquainted also with the wonderful Works of God? labour in the first place to bring thy Appetite into Subjection to Reason.

Every school child in America knows the famous poem from the pen of Henry Wadsworth Longfellow - - "Listen, My children, and you shall hear - of the midnight ride of Paul Revere - On the eighteenth of April, in Seventy-five Hardly a man is now alive who remembers that famous day and year. . . .'' But, what of the "OTHER" ride. Long neglected by history, it undoubtedly had a greater impact on the outcome of the American Revolution then did Paul Revere's ride. The following is a brief story of one of the most daring rides in history.

The hero of this unbelievable story, Jack Jouett, looked the part of a hero. 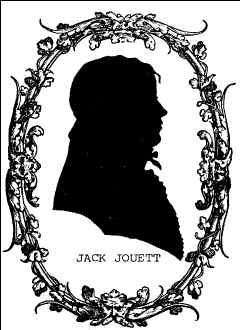 He stood a towering 6 ft 4 inches tall, weighed 220 pounds, and it was said of him that he "evidenced muscular developement and not adiposity", and in one local account was described as "handsome". Jouett was a Captain of Virginia Militia and was stationed in the Charlottesville, Virginia area. Late on the evening of June 3rd of 1781, Captain Jouett was asleep on the lawn in front of the "Cuckoo Tavern" (now a private residence). He was awakened by the sound of a large number of horsemen. Sitting up, he observed a large unit of the dreaded "White Coats", a nick-name given to the British Dragoons in Colonel Banastre (the Butcher) Tarletons regiment. Tarleton himself was leading the cavalry column. Jouett was quick to realize the objective of this force. The Virginia General Assembly was in session at Charlottesville, some forty miles from the Cuckoo Tavern, and Governor Thomas Jefferson, Patrick Henry, and many other notorious 'rebels' were there. They were virtually helpless, as most of Virginia's fighting men were up north with General George Washington, and the local Militia was ill-equipped and too few in numbers to stop Tarleton. The young General Marquis de LaFayette, who had been so successfully harassing the British, Tarleton in particular, was too far away to be of any assistance. The enormity of the situation sat squarely on Captain Jouetts broad shoulders. He and he alone had to save the General Assembly. It was utterly impossible! A forty-mile horseback ride in the middle of the night over rough terrain. Revere rode only 15 miles over good roads. Col. Tarleton certainly had advance scouts on the road to Charlottesville, hence that route was denied to Jouett. He had to go through the tangled Virginia backwoods.

No sooner had the hoofbeats of the British Dragoons faded into the night, when Captain Jouett saddled his horse and plunged into the dense woods. Virginia Dabney wrote in his version of this story in the June, 1928 issue of Scribner's magazine - "The unfrequented pathway over which this horseman set out on his all-night journey can only be imagined. His progress was greatly impeded by matted undergrowth, tangled bush, overhanging vines and gullies . . . his face was cruelly lashed by tree limbs as he rode forward and scars said to have remained the rest of his life were the result of lacerations sustained from these lowhanging branches."

A speedy horse, a strong will, and the aid of a full moon gave Captain Jouett a slight advantage. With the first light of dawn he arrived at Thomas Jefferson's famous home, Monticello. He awoke Governor Jefferson and some of the Virginia Legislators who were staying at Monticello. Then, without hesitation, the exhausted Captain turned his horse and galloped to Charlottesville to spread the alarm. The Assemblymen at Charlottesville scattered, but only after voting to reconvene on June 7th at Staunton.

Shortly after Governor Jefferson received the warning, he dispatched his family, gathered his important papers and then, he too departed. In his haste, he dropped his light walking sword. Realizing it a few minutes later, he returned to Monticello and retrieved it. While there he observed British Dragoons. Mounting his horse, he again galloped away.

How close was his escape? Henry Randall, in his book, THE LIFE OF THOMAS JEFFERSON, reported that while Jefferson was on the lawn of Monticello, Captain of Dragoons McLeon was actually in the house.

Captain Jack Jouett's heroism was acknowledged by the Virginia Assembly , who presented him with a brace of silver mounted pistols and a jeweled sword.

In 1782 Jouett migrated to Harrodsburg, Kentucky, the first settlement there. He married Miss Sally Robards, a former girlfriend from Virginia, and raised a family. He was very much involved in gaining statehood for what is now Kentucky, and later imported fine horses and cattle from England. It is said that he established the livestock industry of Kentucky. Captain Jack Jouett died on March 1, 1822 at the home of his daughter in Bath County, Kentucky. His place of burial is unknown.

Stuart G. Gibbony, President of the Thomas Jefferson Memorial Foundation said of Jack Jouett in 1926: "But for Captain Jack Jouett's heroic ride, there would have been no Yorktown and the Revolutionists would have been only unsuccessful rebels." A fitting tribute to a gallant Patriot.