Genius without Education is like Silver in the Mine. 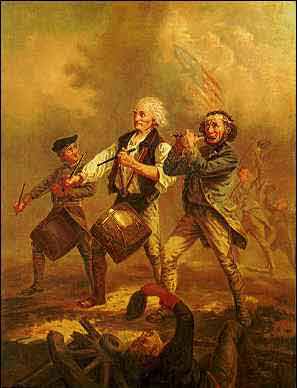 Despite the near universality of this image as synonymous with Americanism and its instantaneous recognition in the iconography of the Revolution, the world of art has never considered it to be Art with a capital "A".

As a result, you'll search in vain in your local library for an art history book that mentions the work or the artist.

What we do know about Archibald McNeal Willard (1836-1918) is that he was an Ohio boy and a carraige painter by trade. He moved to New York City to study art in 1873. He first painted this work for the Philadelphia Centennial Exposition of 1876.

Almost immediately, it was dismissed by art critics as little more than a cartoon. However, it seized the public imagination with the kind of fervent adulation we see exhibited for todays' rock stars. After the Exposition, it went on tour from Boston to San Francisco, and was admired by sell-out crowds wherever it was shown.

Willard himself is known to have created four different versions (and maybe more). The one you see here is the property of the U. S. State Department and was most likely painted in 1875. It is believed to be the version that served as the basis for the chromolithograph published by J.F. Ryder of Cleveland, Ohio, for the Centennial of 1876. When first completed it was known as "Yankee Doodle", and only later became known as"The Spirit of '76".

There were apparently many, many copies, as one art historian who thought the work worth mentioning noted derisively that the thousands who viewed it during the national tour were dwarfed by the number who came to own copies.