All blood is alike ancient.

AMERICANREVOLUTION.ORG
"Mad" Anthony Wayne
His Body Did Not Rest in Peace
by Hugh T. Harrington and Lisa A. Ennis

Hugh T. Harrington is an independent researcher living in Georgia. He may be reached by clicking on his name.
Lisa A. Ennis is Coordinator of Instruction & Government Documents Librarian at Georgia College & State University in Milledgeville, GA.

Despite serving throughout the Revolutionary War, General "Mad" Anthony Wayne never achieved the fame or notoriety to make his name truly memorable. He was a dedicated and courageous officer but other than having the sobriquet "Mad" associated with his name he did not participate in activities that would make him stand out conspicuously among a host of other officers. However, the story involving his grave and corpse takes second place to that of no other prominent man in the history of this country. Students of the Revolution and the Northwest Territory may speak of Germantown, Stony Point, Paoli and Fallen Timbers but the truly remarkable, even bizarre, events surrounding Anthony Wayne occurred after his death. 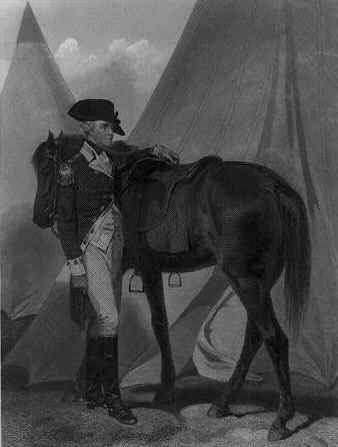 Left - Anthony Wayne as he appeared during the Revolution (19th century woodcut after a painting by Chappel.) 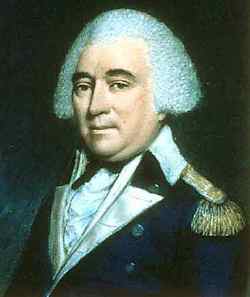 On November 19, 1796 General Wayne arrived, by boat, at Presque Isle, now Erie, Pennsylvania from Detroit. He was suffering from what has been described as "a severe fit of the gout."1 He was taken to the quarters of the commander of the military post, Captain Russell Bissell, for medical treatment. General Wayne asked that Dr. J.C. Wallace, stationed at Pittsburgh 100 miles away, be summoned. The General was attended by Dr. George Balfour who on December 10th "dispairs of his recovery."2 The gout reached his stomach and caused Wayne to suffer agony for several weeks.3 At 2 a.m. on December 15, 1796, at the age of 51, General Wayne died in the arms of Dr. Balfour. Dr. Wallace had not yet arrived. The General had requested that his burial take place two days after his death and that he be buried, wearing his uniform, in a plain wooden coffin at the foot of the flagstaff of the post's blockhouse.4 The top of the coffin was marked with his initials, his age and the year of his death in brass tacks.5

And thus his body remained for 12 years. In the fall of 1808, however, General Wayne's daughter, 38 year old Margaretta, while seriously ill, suggested that her brother, 37 year old Colonel Isaac Wayne, bring their father's remains back to the family burial plot in Radnor, Pennsylvania. The following spring, Colonel Wayne made his way, traveling by sulky, a light two wheeled cart, to Erie, Pennsylvania in the northwestern corner of the state. He enlisted the services of Dr. Wallace, the same man who had been summoned at his father's final illness, to handle the arrangements of disinterring the remains. Colonel Wayne, preferring to remember his father as he had been in life, did not attend the disinterment.6

What happened next is a series of events that can only be described as bizarre. The General's coffin was opened and to the surprise of all it was discovered that his body had not decomposed. It was in an excellent state of preservation with the exception on one leg and foot that were partially gone. Clearly, the body could not be removed to Radnor, Pennsylvania in a sulky. Dr. Wallace's solution to the problem was to boil the body in water thus enabling him to separate the flesh from the bones, then they easily packed the bones in a trunk for their journey to the new burial location in Radnor.7

Dr. Wallace had the help of at least four assistants8 as well as the company of other spectators. The wife of Captain Dobbins and her family were living at the Garrison at the time and she, along with several of her lady friends, observed the body. She took a lock of the General's hair. Apparently, many years later, as she neared her hundredth year she had a clear recollection of the event. She said that the hair pulled out of the head had the appearance of plaster of paris. The body was not hard, she said, but rather more the consistency of soft chalk.9 Henry Whitney, in his letter of October 24, 1809, said that he was told, "the flesh on his back bone was 4 inches thick solid and firm like new pork."10

One of the General's boots had disintegrated along with most of the foot and leg. The other boot was in good condition. One James Duncan noticed that the boot would fit his own foot so he took possession of the boot and had a boot maker make a match for it. He wore his "new" boots until they wore out.11

A large kettle was procured and as the body could not be boiled in one piece it was cut into convenient pieces and dropped into the boiling water. As the flesh separated from the bones it was carved away by Dr. Wallace and his assistants who scraped the bones clean. The bones were then packed in a trunk. The water in the kettle, along with the flesh, knives and instruments used in the operation, were put back into the coffin in the original grave.12

It is said that Isaac Wayne regretted the decision to handle his father's body in such a manner. Had he known of the state of preservation he would have preferred to have left the body in Erie and erect a monument there to his father's memory.13 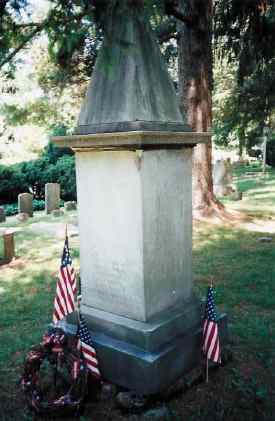 Left - One of "Mad" Anthony Wayne's graves - this one in Radnor, PA.

Colonel Isaac Wayne then returned the bones of his father to Radnor, Pennsylvania where they were interred at St. David's Episcopal church. The Philadelphia newspaper the United States Gazette of July 6, 1809 describes a meeting of the Society of the Cincinnati that took place on July 4th in which decried "the honorable honourable but neglected remains of this once highly revered member of our Society, now lie on the dreary, inhospitable beach of lake Erie" where "shameful to relate, this patriot and warriour (sic), hath not a "Hic jacet" inscribed on a small stone, nor even a little memento, of any kind, erected to his glorious memory." The Society of the Cincinnati "resolved that a sum of five hundred dollars be appropriated to erect a monument to the memory of General Anthony Wayne"14

On June 5, 1811 the Pennsylvania State Society of the Cincinnati put a monument over the grave, which still stands though badly weathered.15 A ceremony took place at the new gravesite. An immense crowd gathered for the occasion that included a funeral procession a mile long. At 4 and 5 AM troops of cavalry mustered in Philadelphia for the long march to Radnor. Among the military units in attendance was the First Regiment of Cavalry of the City and County of Philadelphia, the First Troop of Light Horse, the Second Troop of Light Horse, and the Montgomery County Troop of Light Dragoons.16 Isaac Wayne and other members of the family met the procession ten miles from the burial site. The Reverend David Jones, a chaplain, who served with Wayne during the Revolution, gave the oration.17

The tale of Anthony Wayne's graves does not end with the flesh in one grave and the bones in another. On November 10, 1853 the old abandoned blockhouse was apparently set on fire by arsonists and burned to the ground.18 In later years the old parade ground was leveled off and the site of the grave was lost.19 In about 1878 a Dr. Germer, of Erie, investigated the location of the General's original burial place. He caused the grave to be opened a second time. He discovered the lid of the coffin with the brass tacks giving the initials and date of death.20 Most of the rest had rotted away. The State of Pennsylvania, in 1880, rebuilt the blockhouse as a memorial to Anthony Wayne.21 The blockhouse has since been rebuilt several times, the last being 1984. The original coffin lid, some remnants of clothing and Dr. Wallace's equipment are on display.22

The kettle, which was used to boil the body of Anthony Wayne, is no longer known to exist. In the 1950's a kettle was displayed by the Erie County Historical Society as that used to process the body of Anthony Wayne. In recent years it was revealed that this was an invention to hype the society's exhibits. The Historical Society has no record of having the historic Wayne kettle among its collection.23

It is a common practice to move the remains of a deceased person from one grave to another. Sometimes whole cemeteries are moved when the area is required for some building project.. In most cases actual remains are carefully, and respectfully, removed for reburial. In other cases decomposition has been complete and there is nothing to move. In such cases a symbolic sampling of the earth at a suitable depth of the grave is removed for reburial. However, no instance of removal of a burial can rival the bizarre nature of that of Major General "Mad" Anthony Wayne. 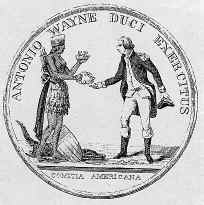 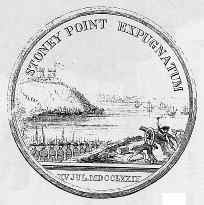 Obverse (left) and reverse of the medal commissioned by Congress to honor General Wayne for his victory at Stony Point. The Indian princess was used as a symbol of America in the 18th century, as Lady Liberty was in the 19th century, and Uncle Sam in the 20th.
Only eleven such Congressional medals were awarded in the entire Revolutionary War, and three of those were awarded for the action at Stony Point.

8Letter dated Oct. 24, 1809 from one Henry Whitney says that four men were hired at 50 dollars each and that the doctor received 70 dollars for his services; The Valley Publishing Company, Sheffield, PA, October 30, 1981 from Erie County Historical Society & Museums.

22Letter of October 26, 2000 to the authors from the Erie County Historical Society & Museums.

23Letter of October 26, 2000 to the authors from the Erie County Historical Society & Museums.